John B. King Jr. (D), the former Obama administration education secretary who is running for governor, announced Wednesday morning that Michelle Daugherty Siri, the executive director of The Women’s Law Center of Maryland, will join his ticket as the candidate for lieutenant governor.

Former U.S. education secretary John B. King Jr. has selected Michelle Siri, an attorney and women’s rights advocate, to join his ticket in his bid to become Maryland’s next governor.

Maryland candidate for governor John B. King has tapped Michelle Siri, the executive director of the Women’s Law Center of Maryland, to run for lieutenant governor together on a ticket later this year.

The 60-second Web ad, backed by what King’s campaign said was a ‘six-figure’ media purchase, builds on his campaign theme of using education to bridge gaps in wealth, justice and health that put many of Maryland’s Black families at a disadvantage

In addition to serving as a biographical spot that introduces King to voters, the ad also serves to highlight his educational bonafides and argue that King is the candidate best positioned to answer conservatives’ attacks around education and ‘Critical Race Theory’ — a quality he argues is important following Democratic losses in Virginia this year.

Republican attacks on K-12 race education feel personal for Maryland gubernatorial candidate John King, not just as a former social studies teacher and education secretary for the first Black US president, but also as the descendent of a man who was enslaved.

John King on Climate: ‘Many of My Opponents Have Vague Policy Platitudes’

King pledges to get Maryland to net-zero carbon emissions by 2035, with an interim goal of a 60% greenhouse gas emissions reduction by 2030, and his plan lays out specific goals for distinct sectors.

Former Secretary of Education and Democratic gubernatorial candidate in Maryland, John King, joined Stephanie Ruhle to discuss teaching as a top issue in the 2021 elections. He shares his perspective on learning loss during the pandemic and calls critical race theory a "dog whistle."

Schools – teachers – saved King’s life as a young child. In every part of the conversation, he centers ensuring every Maryland child has access to any opportunity they can imagine. His voice lights up when he talks about it.

Governor Hogan is shouting ‘Blue Lives Matter’ through a $150 million taxpayer-funded megaphone while playing dog whistle politics and scapegoating Baltimore — a divisive approach that will not make us safer.

Democratic gubernatorial candidate John King laid out his own education plan this week, which he says “goes from cradle to career.”

John King: Government Should be a ‘Force for Good in People’s Lives’

John King began his career in education as a high school social studies teacher in Puerto Rico and Boston, and as a middle school principal.

Black educators struggle to cope with COVID-19 stress: ‘We are overwhelmed’

King tells theGrio that Black education leaders and other leaders are walking a tightrope as they try to serve children and put their foot down on safety measures.

Former Education Secretary John King discusses what the government can do to tackle the learning loss crisis and responds to politicians opposing mask-wearing in classrooms.

JOHN B. KING STATEMENT ON THE BOARD OF PUBLIC WORKS VOTING ON PRIVATE TOLL LANES CONSTRUCTION

“I hope Comptroller Franchot and the Board of Public Works make the right choice and vote against this design contract.”

JOHN B. KING STATEMENT ON GOVERNOR HOGAN’S PLAN TO PRIVATIZE THE BELTWAY

While Governor Hogan is legacy shopping, I will restore any and all transportation project cuts he makes to local transit priorities in his attempt to coerce local leaders to vote his way.

“We can create more inclusive, productive, and stronger communities by ensuring that students who have paid their debt to society are provided with the chance to pursue higher education.”

Obama-era Education Secretary: ‘Betsy DeVos was a disaster for education’

King, who served as Education Secretary during the final months of President Obama's second term and is currently campaigning to become governor of Maryland, described DeVos' legacy as focused on rolling back Obama-era policies and appointing officials who didn't have the best interests of students in mind.

King talked about struggling as a youth after both his parents died, but also about his faith in the redemptive powers of education.

“One of the key questions about Juneteenth is if it’s just performative — just a moment, and not a serious district-wide effort to advance racial equity — then to me it’s grossly inadequate to the moment,” King said.

Maryland gubernatorial candidate John B. King Jr. has raised $1 million, according to his campaign

Maryland gubernatorial candidate and former U.S. education secretary John B. King Jr. has raised $1 million since launching his bid less than two months ago, according to his campaign.

John B. King Jr., a former education secretary under President Barack Obama, is seeking the Democratic nomination to be Maryland’s next governor, his campaign announced Tuesday.

The King/Siri administration will make sure that every Marylander has guaranteed Paid Family Leave.

Governor Hogan has had two terms to address violent crime but chose to spend his time refusing to partner with local leaders, actively stripping resources away from communities, playing dog whistle politics, and scapegoating Baltimore — a divisive approach that will not make us safer.

Promise to Progress: How Maryland will Lead the Fight Against Climate Change

I’m running for Governor to take the promise of a sustainable, livable future and turn it into the progress we so desperately need.

As the delta variant rages and threatens to disrupt another school year, it’s past time for Gov. Larry Hogan to step up, heed the science and acknowledge that the COVID-19 emergency is not over.

Our schools are in poor condition. Here's how to give kids a better learning environment

With nearly 100,000 schools across the country on about 2 million acres of land, one in every six Americans in a typical year relies on our school buildings and grounds for learning, work and wellbeing.

Opinion: My family went from being enslaved to serving in the White House. You can’t erase our history.

I live in Montgomery County, Md. — about 25 miles from where my great-grandfather was enslaved. The cabin where he and his family lived still stands on the property owned by direct-line descendants of the family who “owned” my family.

JONES/KING: Maryland Has a Chance to Be a National Model for Making Racial Equity a Reality

In Maryland, we have taken the challenge of inclusivity and justice — not simply equality — seriously.


RT @PaulGessler: Lt. Paul Butrim, killed today in the line of duty, was honored with a 2015 Valor Award by Firehouse magazine. In the write…


These public servants ran towards danger where anyone else would have run away. I’m keeping the families, loved ones, and everyone from the station of the heroes we lost in my heart in the wake of this tragedy. https://t.co/YAw6ex8CsG


.@MichelleSiri and I had a great time sharing our progressive vision for a brighter, more just, and more prosperous future for Maryland with @OurRevolutionMD yesterday! https://t.co/3YN9yRlGKi 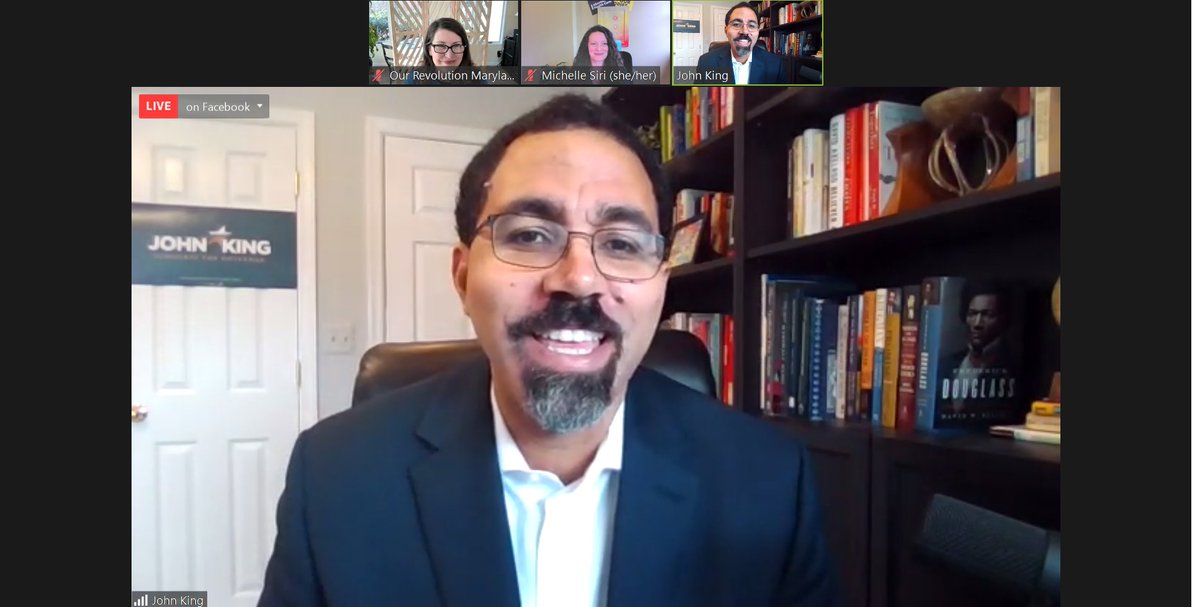 
We owe first responders an unpayable debt of gratitude. I'm praying for the recovery of these firefighters. https://t.co/sS9OVSSwzp


Gen-Z has been exposed to tragic gun violence, the looming threat of climate change, and an economy rigged against most of them. As a teacher I see their response to these massive challenges, and I’m inspired. We have to listen to them — because they’re already leading. https://t.co/US4OjNiMEf 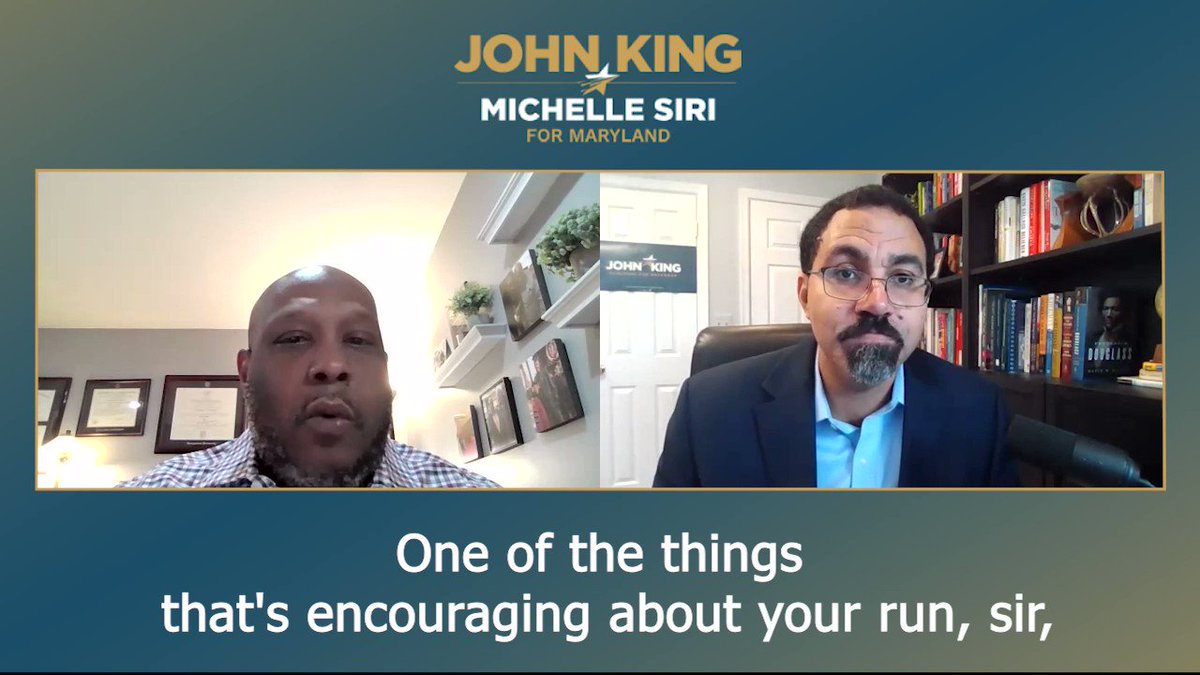